Congratulations to Victoria Derbyshire, reporter Noel Phillips, and the BBC for bringing NHS Continuing Healthcare (CHC) into the public arena –  exposing what we have always referred to the NHS’s ‘best kept secret’ – hidden FREE funding based on a health need, which many thousands of people have not been told about or wrongly denied  – and which could have saved them thousands of pounds in care home fees.

“It’s been a neglected issue, but not anymore!” said Victoria Derbyshire, introducing her programme.

If you didn’t see the TV programme watch it here. This is a MUST!

It is unarguably the best, most in-depth, analysis of the problems and injustice families face when seeking NHS funding for their relative.

The starting point is that if you have a ‘primary health need’ then all your care needs and accommodation should be paid for in FULL by the NHS.

Individuals who save all their life, pay taxes, and at the point they need help from the NHS – it isn’t there!  Read on…

Victoria Derbyshire proclaimed “It’s a national scandal! Families spending their life savings to pay for care for their severely ill relatives when it should be paid for by the state.”

The programme addresses the key questions:

1. Whether vulnerable people have been denied funding which they are legally entitled to?
2. Is the NHS unlawfully withholding funding to those entitled to it?
3. Why are assessments taking far too long?

Victoria Derbyshire exposes the whole scandal and lack of transparency as to the availability of NHS Continuing Healthcare, and who is more likely to get it. On her programme we hear from families telling their heart-rending stories and their fight against the NHS to try and secure funding for their relative – battling the odds against and the NHS ‘machinery’. One family was rejected for NHS funding on 3 separate occasions despite overwhelming healthcare needs!  We hear of flawed assessments – whether deliberate or due to sheer incompetence – sometime done by assessors who do not even know the individual, or are unqualified or untrained in the assessment criteria, or else are ‘instructed’ or intimidated by indirect pressure to turn people down for CHC funding, against the weight of evidence pointing to CHC funding being granted. And even if CHC Funding is recommended following assessment, the assessors’ opinion can often be entirely disregarded by the ultimate decision makers and then overturned arbitrarily. We hear of one NHS nurse assessor who left the NHS because she felt it was morally wrong to deny funding, when it so obviously should have been awarded. In other scenarios, we learn that funding often comes too late, at the end of life situation, sometimes even after the person has passed away.

Why? Quite simply – it’s all down to funding and financial gatekeeping!

The NHS have to save £855m in CHC funding by 2021. Restricting CHC funding, or withdrawing an individual’s existing care package, is therefore a simple way of making these efficiency savings – but it causes misery, anger and frustration for those individuals legally entitled to this free funded care – who have wrongly been denied critical funding, and failed by the flawed CHC assessment system, which is open to abuse.

CCG assessors may seek to hide behind ‘escape clauses’ – such as the individual’s “needs aren’t complex enough.” But, figures obtained by this BBC programme show the Parliamentary and Health Service Ombudsman investigated 496 complaints about CHC funding last year.  Campaigners claim it is a deliberate strategy by health officials to cut spending on the care, even though it is a legal right for tens of thousands of vulnerable patients.”

Reporter, Noel Phillips found that: “Figures we have seen from the Parliamentary and Health Service Ombudsman who oversee complaints into Continuing Healthcare show nearly 200 cases were investigated in the last year, which is why some campaigners have accused local Clinical Commissioning Groups of deliberately withholding funding in order to avoid making payment”.

Andrew Farley, of Farley Dwek Solicitors, interviewed exclusively for the programme said:  “There are thousands of people who have been forced to sell their houses to pay for the care in circumstances when they perhaps ought not to have had to do so.  The problem is that a lot of people don’t know of the existence of this funding, and even those who do know about it, have difficulty in navigating the complexities of the system.  It is a national scandal that people are not being signposted to this funding.”

Noel Phillips said, “For some, though, it hasn’t been a happy ending.  A recent report by the Public Accounts Committee found that some people have died whilst awaiting a decision on their continuing healthcare applications.  NHS Clinical Commissioners, the body which represents all the CCG’s, has told us health officials must operate within the confines of the law and that they are working hard to improve the process to make it fairer for those that need it.”

As Mr Don Keiller Jnr said in his interview, “It’s a complete fiction. There has been recent report by the House of Commons Public Audit Committee dated 2019 and they pointed to the fact that there was huge variation between who gets Continuing Healthcare Funding in different regions. It varies from 28 to 356 per 50,000!”

Our comment: In our experience, this is mere rhetoric from the NHS. The reality is far from the truth, as Don Keiller’s own experience confirms. At Farley Dwek, we have seen no tangible evidence of CCGs improving the process or making it fairer. The assessment process remains entirely subjective, complex, and appears entirely slanted in favour of the NHS  – enabling CCGs to refuse (or withdraw existing) CHC Funding, despite overwhelming evidence to the contrary. In our experience of handling claims over many years now, flawed or blatantly perverse outcomes are quite common. If the NHS is really seeking to improve and make the process more transparent and fairer, less complex and difficult, then why do so few people still qualify for NHS Continuing Healthcare?

Take for example the families featured in the exclusive film: 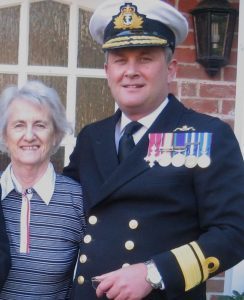 Phillip Mathias, retired Rear Admiral:  Successfully reclaimed £200,000 back from the NHS which the family had paid for in relation to his mother’s care.

“When I eventually won the case on behalf of my father, and sadly my mother died just at the end of that process, at the Independent Review Panel, eventually I recovered a total of £200,000.  At a national level, in my view, this is probably the BIGGEST FINANCIAL SCANDAL IN THE HISTORY OF THE NHS, financially talking, and over the last 5 to 10 years there will be thousands, possibly tens of thousands of people who will have been denied this funding.”

Mrs Joyce Bryant: Her daughter, Lyn Timothy, said on camera, “You are dealing with a very challenging situation involving your mum, and you are also having to deal with the system, that is incredibly difficult, very complex to understand. How are you able to get through all of this?” It shouldn’t be like that. Mum and Dad are of a generation where if they couldn’t afford it, they didn’t have it.  They saved hard to better themselves.  They saved hard for their retirement, and they stood on their own two feet all their lives, and now they need that help (from the NHS), and it is just not there, it’s just devastating.” 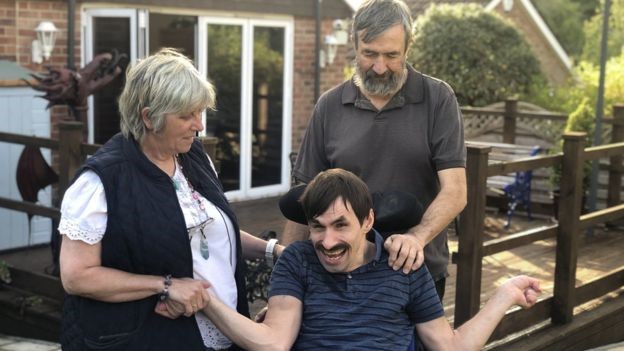 John Morrison: Suzanne Morrison and her husband (above), have been fighting for NHS Continuing Healthcare for their son, John, for 10 years after CHC Funding was withdrawn in 2009. They were told he no longer met the eligibility criteria – despite his condition remaining the same!  John suffers with cerebral palsy, and can’t use his arms and legs. Mrs Morrison said, “watching somebody disappear, when you know… for a simple amount of money it can be stopped, it’s depressing, it’s demoralising, it encompasses every conversation that I have with my lovely husband….” Eventually, last month, Wiltshire CCG accepted that John now qualifies for CHC again, and his family intend to reclaim £300,000 from the NHS.  Mrs Morrison said, “This is the dark side of the NHS. This is the hidden side. This is the disabled side, the dementia side, the Alzheimer’s side…”

In short, it’s all about NHS having to save money and balancing the books!

Sadly, as experienced lawyers in this area, we know that John’s case is like so many other  families we help on a daily basis –  where individuals have intense healthcare needs, yet have been refused essential CHC funding.

Farley Dwek Solicitors have been campaigning for many years to bring the funding issues and NHS failings regarding Continuing Healthcare into the public domain. Farley Dwek are frequently asked for comment in the media.

Farley Dwek know from our own research commissioned, that getting CHC Funding is a ‘postcode’ lottery. For more information visit: https://www.farleydwek.com/national-chf-map/

It’s a national scandal that families aren’t told of CHC Funding, and if they are, it’s complex and undoubtedly an uphill struggle to fight for your relative’s entitlement to this FREE funded package of care. Thousands of families have had to sell their homes, quite needlessly, to pay for their relative’s care. If a fair and robust assessment had been carried out, they could have saved their assets and many thousands of pounds in care fees.

If you need professional specialist help seeking funding for your relative at an assessment, or appeal, or to recover fees wrongly paid for care, then contact us for Initial Advice on 0161 272 5222 or 0800 011 4136.